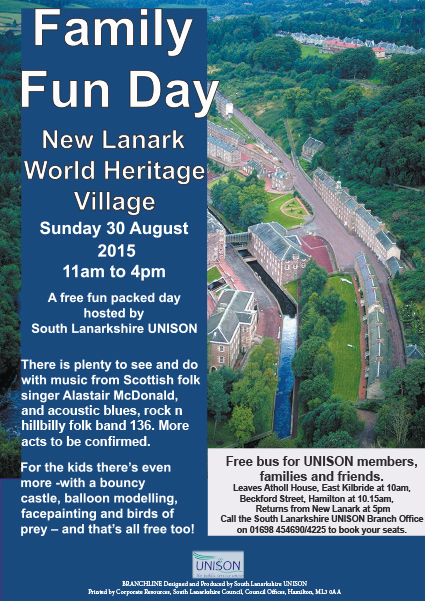 South Lanarkshire UNISON invites UNISON members, their families and friends to the New Lanark Family Fun Day on Sunday 30 August 11am to 4pm.

There is plenty to see and do with music from Scottish folk singer Alastair McDonald, and acoustic blues rock ‘n hillbilly band 136. More acts to be confirmed.

For the kids there’s even more -with a bouncy castle, balloon modelling, facepainting and birds of prey – and that’s all free too!

And you couldn’t ask for a more beautiful setting than the World Heritage Site of New Lanark, where Robert Owen is well remembered some 200 years later for introducing workplace, social and educational reforms that benefitted the workers, their families and the Cotton Mills too. Find out more about New Lanark athttp://www.newlanark.org/

Get there for free from Atholl House, East Kilbride at 10am and Beckford Street, Hamilton at 10.15am. Returns from New Lanark at 5pm. Book your places on the bus with the South Lanarkshire Branch Office on 01698 454225/4690. 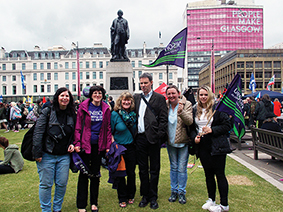 Grahame Smith, STUC General Secretary, slammed austerity, “We know that austerity makes no economic sense, we know that its primary purpose is ideological.”

“It is intended to entrench the economic and political power of a self-interested privileged elite.”

On the UK Government’s plans to significantly restrict trade union freedom further including the introduction of a 50% threshold for strike ballots, Grahame said, “This has nothing to do with democracy or participation. No one should be in any doubt about our determination to resist.”

“As we have demonstrated throughout our history, the trade union movement is ready and willing to be a leading partner in a coalition of opposition to austerity and to these attacks on working people, their families and communities.”